How The Barber, And Other Caring Adults, Help Kids Succeed

0 shares
“Any help these kids can get with reading and … comprehension is a big thing,” said Ryan Griffin, the veteran barber who instituted the program. “You know, maybe someday some kid will grow up and be a journalist, be a writer, and he’ll say, ‘You know what, when I was young, my barber used to make me read.’”Anya Kamenetz, nprED

In a working-class city in southeast Michigan there’s a barbershop where kids get a $2 discount for reading a book aloud to their barber.

We published a story about Griffin and the shop two weeks ago and ever since they have been overwhelmed with praise, donations and requests for interviews from all over the country and the world. That left of us wondering why exactly this story went viral.

Maybe it’s because Griffin’s sentiment, about helping kids succeed, resonates with a lot of us.

Take this recently released first-of-its-kind study that found for every 1 percent increase in the adult-to-youth ratio in a given community, there was a 1 percent decrease in the rate of young people dropping out before graduating high school.

In other words, simply having more grownups around helped kids to stay on track.

The authors of the report, Jonathan F. Zaff and Thomas Malone, call this phenomenon “adult capacity” and found that the effect was 30 percent stronger in predominantly African-American communities, where for every five more adults there was roughly one less dropout.

America’s Promise Alliance, a youth advocacy group, released the report, which looked exclusively at metropolitan areas across the U.S. by ZIP code. 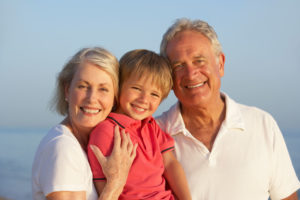 Some of these adults are in regular contact with young people, like parents, teachers, school bus drivers, crossing guards, or those who work directly with youth in places of worship or community based organizations.

Others provide “eyes on the street.” In the words of urban theorist Jane Jacobs, reinforcing safety, community norms and values. Still others may be neighbors or friends who directly mentor and nurture young people or support even their parents.

By contrast, a community with fewer adults, as low as one for every child, can also be described as being in a demographic “youth bulge.” Other studies have shown that in places like these, young people are more likely to get involved in violence or other negative peer influences.

One more thing: America’s Promise Alliance and the organization Community Commons created an interactive map you can use to look up the “adult capacity” in your own ZIP code, as well as the percentage of young people who are not in school.

Posted on the Chronicle of Evidence-Based Mentoring October 28, 2016; http://chronicle.umbmentoring.org/