At Your Wits’ End With A Screen-Obsessed Kid? 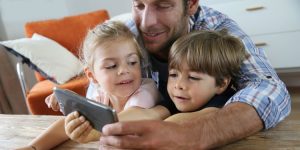 This story is based on an episode of NPR’s Life Kit.

Geoff and Ellie live in a suburban Chicago neighborhood that looks familiar from movies like Pretty in Pink and Ferris Bueller’s Day Off — both filmed in the area.

Ninety-eight percent of families with children now have smartphones. Young children Nathan’s age consume over two hours of media per day on average, tweens take in about six hours, and teens use their devices for nine hours a day, according to the nonprofit Common Sense Media.

Technology overuse ranked as the No. 1 fear of parents of teenagers in a national survey last year.

As we sit in the family room, Ellie tells us how it feels to have a houseful of tiny electronic devices that travel with her kids into their bedrooms, to the table, in the car — everywhere.

“We’re the first generation of parents that has to do this monitoring,” Ellie says.

Case in point: Nathan, her 5-year-old, is tugging at her sleeve:

The problem with time-based rules

How did Geoff and Ellie get here? They are not hands-off parents, nor are they lacking in rules. In the kitchen, Ellie has posted color-coded schedules for all three kids, which show when each child is allowed to use screens.

But the kids don’t listen. They fight back and complain. And sometimes, with dad working full time, mom part-time, and three kids with three different schools and three different schedules, the rules fall through the cracks. “Give them an inch, and they’ll take a mile and you’re in trouble,” Ellie says. “It’s exhausting.”

At one point, all three kids are sitting in separate corners on the sectional couch in the family room, each on his or her own device. Nathan, the little one, is playing on his iPad, totally hidden under a blanket — head and all. As I talk with Abby, Benji looks up and comments, “This is the most I’ve heard my sister say in a while.”

Ellie puts it this way: “I lost my daughter when I gave her the cell phone.”

I’ve brought an expert to observe and to give Geoff and Ellie some tips. Devorah Heitner has a Ph.D. in media, technology, and society from Northwestern University and is the author of the book Screenwise.

This misconception comes in part from the media, she says, and from companies — Apple, Google, Amazon — that advertise parental controls and settings as a magic solution.

Heitner and other experts do say to draw a bright line — and be a little authoritarian if you have to — over two times of day: bedtime and mealtime. Research says that more than two hours a day of screen time for young children double the risk of childhood obesity. Staring at screens can interfere with sleep, not only because of blue light but because of the emotional excitement of media content and the feeling of urgency about responding to messages.

But in general, Heitner advises that families like this one need to switch from monitoring to mentoring. Policing their kids’ device use isn’t working. They need to understand why their kids are using devices and what their kids get out of those devices so they can help the kids shift their habits.

The relationship between teens, screens and mental health is complex and multidirectional

The real lightning bolt of wisdom on this comes from the oldest child, Abby.

Abby, who has braces and a short crop of curly hair, is snuggled in a hoodie. She starts our conversation speaking softly, but when asked what she wishes grown-ups knew about the phone, she speaks right up.

“Taking it away won’t eliminate problems, ’cause it’s not the sole reason that they existed in the first place.”

Abby’s mom has sent her articles about research linking teen depression and suicide to screen use. A 2017 article in The Atlantic magazine — “Have Smartphones Destroyed a Generation?” — drew a link between negative trends in teens’ mental health and the rise of smartphones and social media.

But Abby has a point: The relationship between screens and kids’ mental and emotional health may not be so simple.

“[People always say] the iPhones are the only reason kids are depressed and can’t sleep and have all of these problems — not stress from school, from other people, from other things happening,” Abby says. “It’s never the only reason.”

More recently, a paper from Oxford University analyzed the same data featured in that Atlantic article — more than 350,000 participants in three huge surveys — and arrived at a different conclusion.

The negative relationship between teens’ mental health and technology use is real — but tiny, the researchers found.

“It is extremely, extremely small,” says Amy Orben, the lead author of that paper and two other related studies. “A teenager’s technology use can only predict less than 1% of variation in well-being. It’s so small that it’s surpassed by whether a teenager wears glasses to school.”

In Orben’s view, Abby is dead-on. As Heitner says, “If you hand a happy kid a phone, they’re not going to turn into an unhappy, miserable kid.”

Heitner does caution, however, that devices can “turn up the volume” on existing issues. Children who have special needs or mental health challenges are also more likely to have problems with screens.

This goes for Benji, the middle child. He has anxiety, ADHD and emotional disabilities, and he is prone to meltdowns. Heitner says, in cases like his, parents should consult a professional who knows the child, be it a psychiatrist or occupational therapist.

But there’s another side to that dynamic as well. Some children and teenagers who struggle with mental or emotional health may find that zoning out and playing a game helps them regulate their emotions and avoid meltdowns. For this family, for example, letting Benji bring his iPad allowed him to sit through his big sister’s eighth-grade graduation, and that’s a trade-off the family is willing to make.

And kids can use smartphones to connect with others and therefore feel better too.

In a national study of teens and young adults, Vicky Rideout, a longtime media-effects researcher, found no significant relationship between the young people’s self-reported mental health and how often they used social media.

The young people in the study who were depressed didn’t use social media more often — but they did use it differently, sometimes to feel better. “One of the things that teens are doing online is searching for information and tools to help promote their well-being,” Rideout says.

This has been Abby’s experience. “When you’re really upset, you can use your phone to distract yourself, or contact a friend who can help you, or use it to get your mind off the bad thoughts.”

How to strike a balance? To start, try mentoring, not monitoring

Heitner’s work emphasizes a concept that’s also put forth by the American Academy of Pediatrics in its guidelines for parents: media mentoring.

As opposed to monitoring — with charts, schedules and parental controls — mentoring means understanding the media that kids use.

“Mentoring is knowing the difference between Minecraft and Fortnite. Mentoring is looking at the emotional effects of playing in a competitive mode versus a collaborative mode,” Heitner says.

“It’s understanding that … what your kids are doing is part of their identity, whether it’s through the kinds of people they follow on Tumblr or the kinds of things they share.”

Abby, for example, follows YouTubers who talk about important issues — emotions, mental health, body image, self-esteem. It’s important that her parents understand what she is looking at so they can talk to her about it, share their own values and offer support if needed.

Look for the good in your kids’ media interests

For Benji, Minecraft is a social space where he plays with other kids and pulls pranks. He says he wishes his parents understood more about his screen use — “why it’s entertaining and why we want to do it. And also, for YouTube, why I watch other people playing games. When you watch sports, you’re watching another person playing a game! Why is it so different when you’re watching a person play a video game?”

Scientific debates still rage over whether media use on its own constitutes a true addiction. Meanwhile, psychologists, including Sarah Domoff at Central Michigan University and Douglas Gentile at Iowa State University, have developed a diagnostic quiz designed to be taken by the parents of children 4 to 11.

The Problematic Media Use Measure is based on the criteria for diagnosing a gambling addiction. Parents rate each statement on a scale from 1 (never) to 5 (always).

Abby points out that as kids get older, having their own private worlds online is kind of the point. “There’s a language that teenagers have formed through memes — it would be hard to explain” to adults, she says. But Geoff, her dad, jokes with her about it: “There are things that I understand, even though I’m super old.”

Heitner reminds Geoff and Ellie that the distance they feel from their oldest is also a normal part of growing up. Ellie responds, “That’s a really important fact. I didn’t think of it that way. I just thought of it as it’s the phone’s fault.”

Work together as a family to make changes.

A few days later, Heitner gets on the phone with Geoff and Ellie.

She tells them to get the devices out of sight and out of mind more often. This goes for mom and dad too, she says. Her advice:

Two weeks later, we checked back in with Geoff and Ellie to see how things were going.

They said that they sat down with all three kids with “a bribe” — their favorite Ben & Jerry’s ice cream — to talk about making some changes to the screen-time rules.

Nathan, the little one, was pretty easy — he’s playing more with his toys now and reading books during snack time.

Benji has made the most progress. He tells us he has been reading a lot more. He found a book series he loves, Wings of Fire, about dragons.

His parents say his mood is much better. They’re amazed.

Abby, the oldest, has been the toughest nut to crack. But she has been helping out more around the house and doing more projects like cooking.

She made edible cookie dough from a recipe she found online, and the whole family ate it together while watching Ferris Bueller’s Day Off — a bit of sanctioned screen time, because it counts as a whole-family activity.