The Moment of Youth 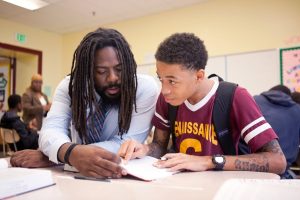 Six qualities that make you a good mentor for teens

We understand the benefits of mentoring young people when we hear the powerful stories of teens whose lives have been changed by a single, caring adult. If you listen, those stories are everywhere. Like me, you likely have a story of a mentor from your own youth.

What we know about mentoring is that it matters to positive youth development. Now, one of the largest mentoring studies ever conducted continues to support this thinking and links mentoring to a reduction in bullying.

A five year study sponsored by Big Brothers Big Sisters Canada found that children with mentors were more confident and had fewer behavioral problems. Girls in the study were four times less likely to become bullies than those without a mentor and boys were two times less likely. In general, young people showed increased belief in their abilities to succeed in school and felt less anxiety related to peer pressure.

Mentoring relationships with youth are complex and there is more to be learned about what makes them succeed, particularly when mentors are matched through organizations like Big Brothers Big Sisters and other kinds of nonprofits. In my own research with teens who became engaged citizens, all of the young people in the study had naturally developed mentee-mentor relationships with adults sometime during their middle and high school years. None were matched by organizations.  Nonparent mentors – teachers, clergy, and civic leaders – were highly instrumental in how these teens learned to believe in themselves and tackle challenging goals – much like those in the Big Brothers Big Sisters study.

We know that mentoring is particularly beneficial to disadvantaged teens. A study conducted by North Carolina State University showed that youth from disadvantaged backgrounds are twice as likely to attend college when they have a mentor, particularly a teacher. It also showed that less than half of disadvantaged students have any adult mentor and that only seven percent named a teacher as a mentor.

A study of African American youth conducted by the University of Georgia showed how important mentors were to teens with hardships. For example, young people who had experienced discrimination, family stressors, and abuse were less likely to break the law or engage in substance abuse if they had a positive mentoring relationship. Again, their mentors provided the relational support to help them belief in their abilities and overcome difficult life challenges.

While many studies have focused on the effects of mentoring disadvantaged teens, we know that ALL teens reap big developmental dividends from nonparent mentoring relationships during their high school years. Regardless of income level, my study showed that teens grew intellectually, interpersonally, and emotionally from supportive mentors. For example, most reported they were better planners, organizers, and problem-solvers. And they grew in self-confidence and self-awareness.

Six Qualities that Make You a Good Mentor for Youth

Most studies have focused more on the effects of mentorship on youth and less on what adults actually do in their role as mentors.  But in my interviews with more than 40 young people who were mentored by adults, some common and important themes emerged.

Young people agreed that you are more likely to influence their life path if you possess the following six qualities:

By far, the most important role of a mentor is to support and encourage young people, particularly as they struggle to overcome obstacles and solve problems. When young people feel down, upset with their families, or unhappy in their life situations, mentors are beside them, letting them talk about anything and reminding them of their innate value.

Mentors listen first and speak last.  Many teens mentioned how little they feel listened to by most adults. Often, they feel inferior even when they have good ideas. But mentors are different. They always listen, even when they are not obligated to do so.

As parents can attest, most teens don’t respond well to being pushed out of their comfort zones, particularly within families. But teens really like to have high expectations set for them – both academically and personally. They appreciate when mentors push them beyond what they may have imagined they could accomplish. In fact, this is likely the reason why mentored youth from disadvantaged backgrounds are twice as likely to attend college.

Teens can tell the difference between adults who are authentically interested in them as individuals and those who are just playing a role. Mentors engage youth to understand all aspects of their lives and interests. They value young people’s ideas and honor their changing feelings and moods.

Good mentors don’t judge young people or impose their own beliefs on them. Instead they remind teens who they are and help them believe they have the insights to make good choices. Knowing they are not being judged helps young people think through decisions critically, sifting through the deeper values that will inform the adults they become.

Adult mentors provide perspective to young people from their additional years of life experience. When obstacles seem overwhelming, mentors help put those challenges in perspective. They also help young people see both sides of a situation, helping model the skills of positive skepticism.

What other qualities make good mentors for young people? How can we provide mentoring relationships to all teens? Please share your insights and experiences.

Marilyn Price-Mitchell, PhD, is the author of Tomorrow’s Change Makers: Reclaiming the Power of Citizenship for a New Generation. A developmental psychologist and researcher, she works at the intersection of positive youth development and education.