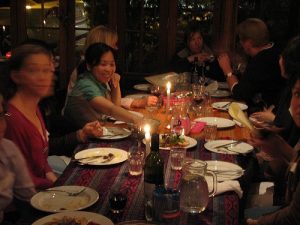 Kathy Fletcher and David Simpson have a son named Santi, who went to Washington, D.C., public schools. Santi had a friend who sometimes went to school hungry. So Santi invited him to occasionally eat and sleep at his house.

That friend had a friend and that friend had a friend, and now when you go to dinner at Kathy and David’s house on Thursday night there might be 15 to 20 teenagers crammed around the table, and later there will be groups of them crashing in the basement or in the few small bedrooms upstairs.

The kids who show up at Kathy and David’s have endured the ordeals of modern poverty: homelessness, hunger, abuse, sexual assault. Almost all have seen death firsthand — to a sibling, friend or parent.

It’s anomalous for them to have a bed at home. One 21-year-old woman came to dinner last week and said this was the first time she’d been around a family table since she was 11.

And yet by some miracle, hostile soil has produced charismatic flowers. Thursday dinner is the big social occasion of the week. Kids come from around the city. Spicy chicken and black rice are served. Cellphones are banned (“Be in the now,” Kathy says).

The kids call Kathy and David “Momma” and “Dad,” are unfailingly polite, clear the dishes, turn toward one another’s love like plants toward the sun and burst with big glowing personalities. Birthdays and graduations are celebrated. Songs are performed.

Kathy Fletcher and David Simpson shared a meal and sparklers with more than a dozen young people this Fourth of July. Credit AOKDC.org

I started going to dinner there about two years ago, hungry for something beyond food. Each meal we go around the table, and everybody has to say something nobody else knows about them.

Each meal we demonstrate our commitment to care for one another. I took my daughter once and on the way out she said, “That’s the warmest place I can ever imagine.”

During this election season of viciousness, vulgarity and depravity, Thursdays at Kathy and David’s has been a weekly uplift, and their home a place to be reminded of what is beautiful about our country and what we can do to bring out its loveliness.

The kids need what all adolescents need: bikes, laptops and a listening heart. “Thank you for seeing the light in me,” one young woman told Kathy after a cry on the couch. David and Kathy have set up a charitable organization called AOK, for All Our Kids, to help each of the kids come into his or her own fullness. Four started college this year, and one joined City Year, the national service organization.

Poverty up close is so much more intricate and unpredictable than the picture of poverty you get from the grand national debates. The kids can project total self-confidence one minute and then slide into utter lostness the next.

The college application process often seems like a shapeless fog to them; nobody’s taught them the concrete steps to move along the way. One young woman lied on her financial aid forms because she didn’t want to admit that her father was dead, her mother was on drugs — how messed up her home life actually was.

There’s no margin for error for these kids, and she would have lost her college dreams if not for a squad of adults ready to mobilize around her.

The adults in this community give the kids the chance to present their gifts. At my first dinner, Edd read a poem from his cracked flip phone that I first thought was from Langston Hughes, but it turned out to be his own. Kesari has a voice that somehow emerged from New Orleans jazz from the 1920s. Madeline and Thalya practice friendship as if it were the highest art form. Jamel loses self-consciousness when he talks of engine repair.

They give us a gift — complete intolerance of social distance. When I first met Edd, I held out my hand to shake his. He looked at it and said, “We hug here,” and we’ve been hugging and hanging off each other since.

Bill Milliken, a veteran youth activist, is often asked which programs turn around kids’ lives. “I still haven’t seen one program change one kid’s life,” he says. “What changes people is relationships. Somebody willing to walk through the shadow of the valley of adolescence with them.”

Souls are not saved in bundles. Love is the necessary force.

The problems facing this country are deeper than the labor participation rate and ISIS. It’s a crisis of solidarity, a crisis of segmentation, spiritual degradation and intimacy.

Throughout this ugly year, AOK has been my visit to a better future, more powerful than any political tract about what we need next.

Sometimes Kathy and David are asked how they ended up with so many kids flowing through their house. They look at how many kids are out there, and respond, “How is it possible you don’t?”

Posted in The Chronicle of Evidence-based Mentoring