People whose only knowledge of Muslims comes from the media are very likely to have negative emotions and stereotypical beliefs about them, new research shows.

In the Journal of Communication, Srividya Ramasubramanian, associate dean of liberal arts and professor of communication at Texas A&M University, used multiple studies, surveying non-Muslims on how much they relied on direct contact with Muslims versus media-based contact.

“We observed that almost on a daily basis, media depictions of Muslims are extremely negative.”

“We observed that almost on a daily basis, media depictions of Muslims are extremely negative,” Ramasubramanian says. “Almost without exception, they are portrayed in stereotypical ways as violent, criminal, and extreme. Islamophobia is on the rise and even some American political leaders have expressed hateful sentiments towards Muslims.”

The researchers found a correlation between people who rely on media depictions of Muslims and having negative attitudes, versus those with direct interactions who were less likely to view Muslims negatively.

“Direct contact with Muslims had an opposite effect,” she continues. “In other words, reliance on media portrayals of Muslims as compared to direct contact through friends and acquaintances leads to several negative outcomes.”

Some participants with negative attitudes toward Muslims expressed what Ramasubramanian describes as domestic and foreign policies harmful to Muslims.

How can so many non-Muslims have so little interaction with Muslims?

Ramasubramanian says social interactions often revolve around religious, racial, and gender identities in our societies. “There is often a lack of motivation to step outside one’s comfort zone to learn about other subcultures,” she notes. “Even when there is exposure through direct contact, such interactions are often brief, rather than long-term, meaningful friendships.”

She says she hopes the research findings suggest the importance of more direct contact between Muslims and non-Muslims in communities. “Building friendships in this manner may buffer the negative effects of media portrayals of Muslims,” she notes, adding she also hopes the media work to improve the portrayals of Muslims by having more positive depictions.

Given their established and trusting relationships with their mentees, mentors are in special position to be able to help their mentee branch out of their initial social comfort zones in a way that is supportive and affirmative.

By helping their mentee meet and get to know people from different backgrounds and cultures, mentors can help enrich their mentees’ understanding of interpersonal relationships and the communities around them. Further, through such closer ties, it can also help the mentee to understand the implications of larger political rhetoric and policy decisions in a more direct and concrete way.

To see the original article at Futurity, click here. 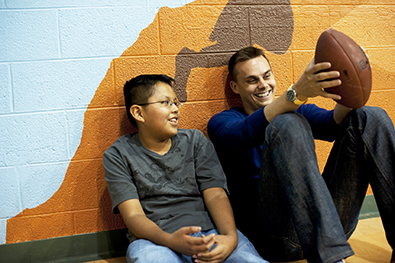 Post From The Chronicle of Evidence-Based Mentoring by Justin Preston August 8, 2016