The ripple effects of mentoring for one family endure for decades 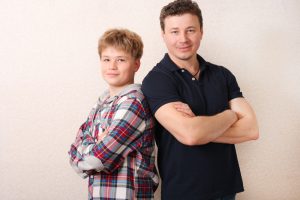 Standing inside the gymnasium of an after-school youth program called PAL, I can’t help but be pulled back to when my son, Rikki, played here as a kid. It was the early nineties, and I had just hit a bottom with alcohol and drugs. After separating from my husband of 20 years, I didn’t know where I was going to go. Thankfully, CLARE Foundation provided me an affordable one-bedroom at their women and children’s center, which would ultimately lay the groundwork for my recovery.

At the time, my oldest son, Jerry, was in juvenile hall and I thought Rikki, who was acting out, was headed there as well. I was scared. I felt like I didn’t have the parenting skills to address the situation since I grew up in a household where adults were often drunk and my mother was trying to kill herself. But I desperately wanted to change the trajectory of my family lineage, from alcoholism and mental illness to one of healing and transformation. And fortunately, I met some amazing women who taught me what it looked like to be a sober mom.

It wasn’t long after that I was introduced to Gary Drake, a guy who had his own troubled youth but was able to get his life on track with the help of a caring mentor. Gary grew up to be a well-respected, businessman who was looking for a way to pass on to others what had been so freely given to him.

Over the course of 10 years, Gary and Rikki hung out together every weekend. They went rollerblading, to the movies and body surfed together. Gary did for Rikki what I couldn’t do. He showed him what it looked like to be a solid, reliable man in the world while still having fun. On top of that when my older son got out of juvenile hall, Gary gave him work at his construction company which helped him get his life back on track.

Fast-forward, to when Rikki was in his early thirties hitting his own rock bottom of sorts. Deeply depressed, he felt like his life of photographing pretty girls and amassing a collection of over a hundred sneakers in every color and style, suddenly had no meaning for him anymore. He felt empty inside. Then one night, he had a stroke of insight and decided to give away some of his shoes to people living on the streets.

The next day, Rikki loaded up his Ford Explorer and drove around LA until he found someone who could use a pair of shoes. As a photographer, Rikki captured the moment and posted it on social media. People loved the images, and soon donations were coming in from all over the country. Suddenly, Rikki saw his purpose in life and started a non-profit called Hav A Sole. In just over three years, with the help of hundreds of volunteers, Hav A Sole has given out more than eight thousand pairs of sneakers.

Today, we have returned to the PAL program to give out shoes to more than one hundred less-advantaged kids. And as I watch Gary, Rikki and the other volunteers, I can’t help but be deeply moved. For not only has Rikki found his purpose, but my older son, Jerry is an amazing father with four kids of his own. This is all tangible evidence to me that my family is healing after all.

In a world where we are bombarded nightly with negative images on the news, I wish people could see what I see when I watch all these volunteers who have come to help out. Not only do we have employees from Nike supporting us but we have private individuals looking for ways to give back. Kevin Lewis has brought a few of the adolescents he mentors, while the Young People’s Professional Committee has generously volunteered their time and resources. Jenny Jackson, a partner in the Santa Monica office, of Bryan Cave LLP, is fitting kids with shoes, while Naked Juice brought a truck full of the savory drinks for the kids. Dagwood’s Pizza made a special delivery while Drake Construction made sure there was enough food to go around.

To all these people who draw upon their own wells of life experience to share their knowledge, support, and resources with the world, through their mentoring and service, I extend my heartfelt appreciation. It is through your loyalty and commitment that “passing it on” becomes fluid by design. And like a stone that is tossed upon the surface of water, the ripple effect becomes wider, transforming the lives of the people that stand in its wake.

The Chronicle of Evidence-Based Mentoring; January 31, 2018/in Contributors /by Justin Preston