What a wildly improbable movie can teach us about mentoring 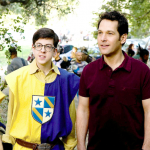 In the comedy, Role Models, two self-absorbed salesmen, Danny and Wheeler, are arrested following a road rage incident and elect to perform community service hours over going to jail. They are assigned to work at a mentoring program where Danny is paired with a nerdy role-playing game enthusiast while Wheeler finds himself trying to connect with a foul-mouthed, street-wise kid who has repelled the overtures of countless previous mentors.

Forging connections with the mentees is anything but easy and, at a particularly low point, both men reconsider the jail sentence over this particular form of punishment. Over time, however, Danny is drawn into the world of his mentee’s fantasy games, supporting his interests in ways that the teen’s parents never would or could. Wheeler connects with his mentee over their shared, painful experiences of parental abandonment and eventually Wheeler leverages this trust into teaching his mentee valuable self-regulation skills. Both Danny and Wheeler gain wisdom and empathy along the way and their lives improve.

Although improbable, threads of this movie align with the latest research on relationships and, in doing so, capture several important truths about what makes mentoring work. Strip away the implausibility of sentencing criminals to mentoring, and strip away their crudeness and shockingly poor judgment, and some of the active ingredients of mentoring relationships are revealed—a positive connection.

The secrets to forging strong ties were recently illuminated in the book, Friend and Foe, by Business Professors Adam Galinsky and  Maurice Schweitzer of Columbia and University of Pennsylvania, respectively. In it, they provide sometimes counter-intuitive, but evidence-based strategies for handling the everyday relationship tensions and difficulties. Certain suggestions (e.g., screw up to gain trust) seem especially relevant to working with teens. Sometimes sharing a good laugh with your mentee at your own expense is a great way to make yourself seem more approachable. With the caveat that the Role Model mentors would be entirely inappropriate, here are six things that, according to research, they get right:

The comfort, familiarity, and closeness that humor conveys may be important to youth in feeling engaged and understood by key adults. Of course, humor in mentoring involves finesse. Adults must maintain boundaries and avoid misinterpretation, sarcasm or inappropriate jokes. But, with mounting research showing the benefits of age-appropriate humor, fun, and laughter in forging close relationships, this and other critical components should not be ignored.

Posted in the Chronicle of Evidence-Based Mentoring; March 14, 2017/in Editors Blog /by Jean Rhodes